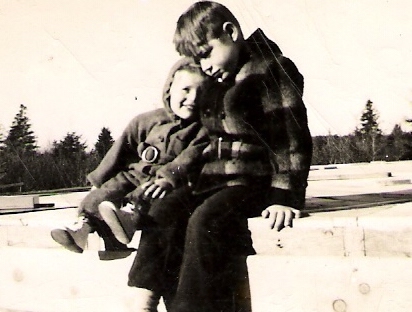 Bobby was my older brother by five years.  I had a younger sister by five years and  beneath her was a younger brother who was six years younger, so we were spread out as far as birth order was concerned and Bobby, being the oldest was just part of our lives.  We knew he was difference; we knew he was special.  We loved him, of course.  We took our cue from our parents and they believed—and we do too—my sister and my brother and I—Bobby’s gone now.  He passed as you may know, in 2011 and he was sixty-eight at the time.  Considering that the doctors had only given him just a few years to live when young, a little toddler, that was quite an amazing thing that he lived that long, and lived a very happy life.  Bobby was my older…a very happy life.

“BOBBY” WAS BORN IN LUBEC, ME, IN 1942. AT BIRTH, HE WAS INTELLECTUALLY DISABLED. HE LIVED WITH HIS FAMILY AS A NONVERBAL CHILD. HIS SISTER, VICKY SCHAD WROTE A BOOK CELEBRATING HIS LIFE AND SHE REMEMBERS THAT HE LOVED THE OUTDOORS.

Winter was tough on him, in fact often he’d go out, even in the cold weather.  And his favorite thing to do was to stand at the end of the lane, the driveway, right on the edge of the road, edgy enough so that it really made my mother really nervous and he would watch the cars way—and Route 189, we could see way—from the end of that driveway we could see way to the top of the hill toward West Lubec and then down toward the village of Lubec and he just loved standing there.  And he had a degree of autism, I think, the kind that would make him wave his arms and jump up and down sometimes when he got excited.   [If] he saw a car that was one he recognized he would do that.  It was his joyful, favorite place to be.

No, I didn’t believe so, not that I ever heard about.  Now, there were people who—in the book I’ve referred to it, alluded to it—people who wondered what would become of him; wondered if he would ever be violent, because he was very strong; wondered if he perhaps might do something to my little sister and me, because we were a lot younger than him.  He never, ever did anything that was the least bit inappropriate.

Some of them were a little nervous around him as he got bigger and older.  I think they felt just sad for him, like he as a child, a little child.  He was handsome, [a] very sweet disposition, but obviously they would say flawed, you know, there was obviously a problem.  There was a period of time when Bobby would set out on his own and and go for a walk, which of course made my mother just crazy, because she always needed to know where he was. Some of them …know where he was.

BOBBY’S CARE WAS MOSTLY OVERSEEN BY HIS MOTHER.

My father worked a lot of hours, and yes, I would definitely say she had the care of him.  She worked part time at the town office.  Part time and temporary help at the town office and the light office, and the weeks that she worked, Bobby would stay with her mother up at North Lubec, mother and father and sometimes even when he was younger he would stay with my great grandmother, her grandmother and that was—he was always with family until that one year.

His behavior was getting difficult in the sense that Mom felt she couldn’t really control him and she was so afraid of him being abducted or something.  She just felt that she couldn’t guarantee his safety.  I think that was the way she would—and she also wondered—she and Dad both—what happens when something happens to us?

SO AFTER GETTING OPINIONS FROM SEVERAL DOCTORS, AND RESEARCHING, THEY WENT TO VISIT THE POWNAL STATE SCHOOL, ALSO KNOWN AS PINELAND, AND MET WITH THE DIRECTOR OF EDUCATION.

He spoke to them about how—before Bobby got there—about how he would be in with a group of kids that were learning to sweep floors and do tasks that they might even be able to get paid for and therefore help to pay their own way—not to Pownal, but through life, and they might live a life that was more independent than what Bobby seemed to be headed for.

IN 1954, BOBBY’S PARENTS DECIDED TO SEND HIM TO POWNAL, BUT THE CATCH WAS, THEY WOULDN’T BE ABLE TO SEE HIM FOR SIX WEEKS.  EVEN THOUGH SHE WAS ONLY SEVEN, SCHAD SAW PROBLEMS AHEAD.

just consider a handsome young man, just entering puberty and—we don’t know, Bobby couldn’t tell us, of course, but we assume, especially because of actions that he did.  He just became very fearful and edgy is the word I keep going back to.  Sometimes he would just bite the back of his hand until it would bleed, as if he needed to—I don’t know, to release that tension or whatever.  He was there for almost the six weeks.  Actually I think he was there just about the six weeks and so during that time we don’t know exactly what happened, but logic and the ability to face—you know, you can just be in denial and say, “Oh, no, I don’t think anything happened to him, but it was much more healing for Bobby for us to acknowledge what had happened and promise him that we would never ever expose him to that again and we didn’t know.

AND IT TOOK SOME TIME FOR HIM TO RECOVER

I would say he was well into his teens, maybe into his twenties before he was completely at ease with people.  If someone would come to the house that he didn’t know he would kind of stay in the shadows.  I don’t remember it clearly enough, I should not even speak that definitively about it because I was a seven-year-old happy go lucky kid, you know and didn’t know what had happened to him or what probably happened to him and there fore my powers of observation were not very finely tuned at that point.  I read a lot and I played a lot and I was learning piano at that point.  It was a different kind of life and I wasn’t paying attention to it because I didn’t realize how profound the injury was.  By injury I mean psychological injury to Bobby, so I don’t know, and my sister doesn’t either, I’m pretty sure.

AS A YOUNG ADULT, HE DID SEEM TO RECOVER

His smile was infectious, and the giggle too.  He would shake hands, as I said, put his face down for a little kiss, or he would just ignore you completely.  If he had his mind on other things, he would just often, you know, wander through the house, or go outside.  When he wanted to go outside it didn’t matter how hot it was, he would go to the hall closet and get a jacket and gloves and a hat. His smile was …gloves and a hat.

AND HE ENJOYED EATING RESTAURANT FOOD—ESPECIALLY AT THE BLUEBIRD IN MACHIAS.

He loved the Bluebird and the Bluebird loved him.  All the waitresses.  When they saw us coming, if it was a little slow, and usually my folks went when it was a little slow, not at the rush hour, you know, and so maybe  one-thirty or two in the afternoon they would com in and the waitresses would see him coming and they’d have to coffee out on the table when they got him through the door and it was just a good relationship.  My dad was a good tipper, so that helped, but he knew that they had a lot of mess to clean up after they left, so he made sure that he paid them adequately through the tip.

EVENTUALLY BOBBY’S PARENTS BEGAN EXPERIENCING SOME HEALTH PROBLEMS AS THEY GOT OLDER AND SCHAD KNEW THEY WOULD HAVE TO FIND A SOLUTION FOR BOBBY.

I remember one night during that really hard time—this is back in 2006 and ’07 and Dad was getting a lot sicker and we were becoming more aware that he had been covering for Mom with the dementia for quite some time.  Of course Bobby was Bobby and he just acted nervous again like he had years before and I went in and sat on his bed one night.  He loved to have people tuck him in.  You’d tickle him, he loved it, he would giggle and laugh (Inaudible.  He was there juggling and worried and I just sensed he was worried.  We all were, of course.  I remember I talked to him, we prayed together and I i said, “I know Mom and Dad are not doing good.  They’re getting sick, aren’t they?”  And I looked at his eyes which often were—he would look around with the autism he had I think just a little bit of that and he was just locked into my eyes and I had sense enough to look right back and not look away because it was quite a moment.  I will never forget it I don’t believe.  I said, “You’re worried that somebody won’t be here to take care of you.”  I said, “Bobby I promise you I will make sure that there’s always someone to take care of you.”

BOBBY STAYED FIRST IN A NURSING HOME AND THEN IN AN ASSISTED LIVING FACILITY WITH HIS PARENTS. AFTER BOBBY’S FATHER DIED, THEIR LONGTIME  PASTOR, ROB GREENE STEPPED IN, SETTING UP A CONFERENCE CALL WITH VICKI AND HER SIBLINGS.

Bobby and Mom lived in their own home for another three years or so, and Mom had to go into the nursing home and they could no longer care for her.  She couldn’t swallow her pills, and you know the things that happen when you have demential or Alzheimer’s.  And then Bobby, he started having more serious heart problems and even though Pastor Rob had seen to it that everybody in the church knew CPR, so they could help him if he collapsed and that was quite a thing.  Never had to do it, but at least they knew how.  So he was a child of the village, really.

BOBBY DIED IN 2011 AT AGE 68   .  SCHAD SAYS HE WAS EXACTLY WHO HE WAS MEANT TO BE AND EVERY LIFE HAS SIGNIFICANCE AND MEANING.

I know that he knew that he didn’t think as clearly as other people did, but I think he did the best he could with what he had, which is all any of us can do. What he would have wanted for himself would probably would have been to be what we would call normal—able to speak able to read, to learn things, to do a job, find a wife and marry, maybe have kids. But I’m not sure that he dwelt on it very long.  I think that his choice was contentment, and we all would do better with that, I think.